I am delighted to announce the imminent (April) publication of my popular science book on virtue ethics and crealectics, written together with my friend Jean-Sébastien Hongre. For the moment only in French.

When I was 16, I traveled alone to Africa. The country was Guinea-Bissau, which was a Portuguese colony until 1974. When my mother was pregnant with me, back in 1971, she was a teacher in Guinea-Bissau; even though I was born in Portugal, you could say that this was the second time I traveled to Africa – the first time in a womb, the second independently.
It was a cultural and philosophical shock for me. Africa was like another planet. Time went slower, poverty was incredible; they had none of the consumerist or relatively comfortable environment I was used to in Paris, where I lived.
I remember the humidity in the air, and the scents of palm trees mixed with the perspiration of the earth under extreme heat. None of what I could see was ordinary. But it felt friendly. I was a curious teenager, and was ready for the adventure. At the same time, I wanted to understand. How can a nation develop in a new way after so many years of Western domination? I could see that people looked poor, but it took more time to understand that they might not be sad about their lives. It was I who was actually sad after several days, and felt lonely and lost.
One day I met a king in the middle of the jungle. He was the king of a group of villages. He was dressed like a European man, with an old suit: this was higher status. To me it was just an old suit. Here was an experience of cultural relativity. There is so much in our lives and our society that we think is natural and serious but it’s just a costume party of conventions. The Swedish king is no less absurd than this little African village king. We see ourselves as civilized, but sometimes we are like superstitious children. When I traveled back to France, I could just stand in a supermarket for example, looking at the ten different brands of toothpaste, and wondering: why do we need ten different brands of toothpaste?
This trip taught me to focus on what is important, basic. Just several weeks after that, I decided that in the future I would write books to understand the human condition.

Peirce argues that there are three forms of evolution: 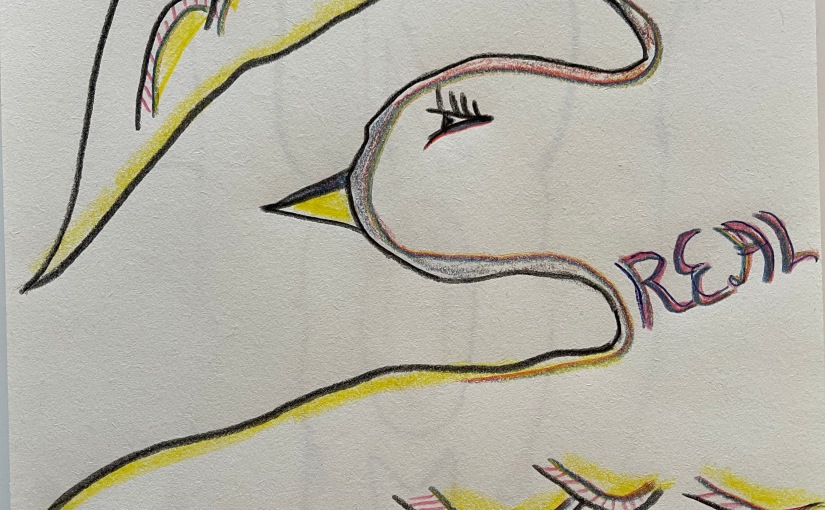 Creativity is a worn and even dangerous concept as long as one imagines that it is the mere privilege of a select few of the human race, a few eccentrics who surprise by combining two or three ideas. It is time to rediscover our deep contact with true creation, the natural one, which constantly springs up all around us from a thousand invisible volcanoes or vacuum fluctuations, the one which grows slowly like a dew of unimpossibilities when our attention is suspended and lets itself be surprised. We ourselves become these springs of joy and overabundance as soon as we stop fetishizing our habits and our fears. To create is first of all to listen to natural profusion.

Ideas sometimes become veiled because words change meaning and become impoverished without disappearing. Creation is one of those evolving words that seem to marry the color of the century that remixes them. Today, we readily speak of creativity as a technique for producing tangible and salable things, an attractive remix of known things.

The idea that everything must have a practical result seems self-evident today, but it emerged quite recently in the West, in the United States, about a century ago, under the designation of pragmatism or the doctrine of efficiency. For the romantics, for example, one could be creative without producing any work, simply by communing with the sublime of phenomena, by contemplating the forces of nature and the universe, by touching the unheard of with the mind, in short, cultivating a real – and useless – open-mindedness. New discoveries, even in science, are not mechanical: creativity is a moment of kairos, that is to say a very specific opportunity to be seized in the heat of the moment, by listening to your intuition. To arrive at penicillin, for example, it took a series of happy coincidences, those that remain invisible to minds limited by short-term effectiveness and received protocols. Wandering is sometimes more creative than obsession as long as you have a horizon.

Creation was for a long time the privilege of God in all religions – but let us reread, for example, the Old Testament; the word of the Creator to his creatures, in Genesis, was already: “Be fruitful and multiply.” Much more than a simple advice conducive to procreation, it was an injunction to be creative in the image of the divine: do not be nihilistic, make your actions fruitful in the long term, and let your identity develop and multiply its reflections in everything you do and touch. Creation is a continuous act, an active listening that reaches far like the millions of ramifications of a forest of neurons.

After the death of God announced by Nietzsche, cosmological creation, driven out through the great door of anticlericalism, returned through the window of philosophy: major thinkers like Bergson and Whitehead rediscovered that the universe was a creative flux, like a stream of infinite possibilities or creative Real, of which only a tiny part is actualized in the form of our reality. It is no longer a God who, out of nothing, would create something once and for all. It is no longer just humans without God who, in order to survive and impose their domination, must constantly overproduce new objects from a more or less limited stock of raw materials or dead matter. At the origin of being and becoming, there is an infinitesimal overabundance, and this metamorphic source of unimpossibility is constantly recreated, without ever being exhausted. The Real is a Creal, a flow of continued creation, invisible to the overly realistic or overly analytic eye.

It is a question of connecting ourselves emotionally to this invisible overabundance, to this ever-exploding multiplicity, of welcoming it into the hollow of our experience and then, for the purpose of living here and now, in a sacred place, of lovingly pruning this reality as one purifies a tree: purifying the living chaos. Which means that creating is actually doing less with more rather than more with less. Understanding this paradox is the first step towards a healthier life and society, because it is simpler, anchored in natural diversity, rather than obsessed with our lacks, a vacuum or a poverty of means which are only the reflection of our anxieties or impatience and that we want to fill artificially.

Nihilism leads to the overproduction of many unnecessary and harmful things. Crealectics, beyond nihilism, is an art of the garden of possibilities, as Voltaire suggested in Candide. Let’s cultivate our garden Earth with an intense and honest sense of rich minimalism: to have the courage not to want everything and the lucidity to want what is good for what we ought to be. Co-create a world in the image of what we deeply admire and respect.

To be fruitful and to multiply, at our level, at the level of planetary care, is to be the composers of our shared harmonies.