There is no such thing as intelligence as a separated thing out there. It can not be localised in a machine or a brain. Intelligence is an act, a process of conscientization. It is a never-ending creative and asymptotic process towards existential, cosmological and political lucidity that uses disparate and ever-changing strategies.

This process of making sense of the dynamic multiple and deciphering the not-yet-conscious (crealectics), cannot be merely algorithmic. It is, on the contrary, the unmasking and overcoming of social, natural, mechanical algorithms. Even science, when it finds an equation, must soon realise that this equation is not universally applicable. All laws are overflowed by the Creal at some point or place.

The field of Artificial Intelligence (and us with it) is condemned to experience many more cold winters if it does not understand the above sentences.

What follows is a short philosophical meditation on death. It is meant to help those who fear death or are experiencing its power.

Have you had this sharp and unique realization? Let’s call it “the absurdity of death”: a deep emotion simultaneous with the perception of you or someone else you love disappearing.

He is no more, she is no more. I will be no more: a subjectivity is thinking its being no more: perhaps this is the beginning (and end) of philosophy, as suggested by Plato. Philosophy as a meditation on death.

The experience of death is nearly unconceivable, in the first sense of absurd. But it is also absurd in the sense of difficult to hear, complex to understand because the voice of death is usually covered by a multiplicity of mundane experiences.

There is something to hear in the emotional experience of the absurdity of death. Let’s face the idea for a while — before we forget about it again? — instead of suffering from it.

Death designates a nothingness. And that nothingness, as it was noted by Buddhists or philosophers like Sartre, is not necessarily nothing. It might for example be an epistemic nothingness, a limit to our knowledge. Or it might be a metaphysical nothingness, a vacuum that is no thing but yet that is not nothing: it could be indeed a force that is inseparable from being, as in Lacan’s or Heidegger’s The Thing. Or Kant’s Thing-in-itself. A noumenon: an absolute unknowable. However, let’s not give up yet and proceed a bit further with our meditation on the “absurdity of death”.

The nothingness felt in the experience of the absurdity of death manifests itself like a destination — I am going to die, she is going to die, he is going to die. But metaphysical nothingness could be an origin. We could say convincingly: in the beginning there was nothing. Now the very fact that nothing iswould then create in some minds a dynamic contradiction. If one transposes this contradiction into a cosmology, one could conceive that something like a Big Bang could have emerged of a primordial contradiction between being and nothingness. That nothing came to be was, for some, the biggest atomic bomb ever conceived, strong enough to create our universe.

Let’s consider it as a logical bomb. Nothing is and is not at the same time: this is at least an idea in our heads, here and now. Why do some imagine that ideas in their heads are real, that they describe cosmological truths? There is already an assumption there, an underlying logic, a belief in the correspondence or analogy between mind and matter, and a belief that our experiences are not radically singular, that they are universal. When I write about the experience of the absurdity of death, I am expecting it to be a transmittable idea, one that makes sense for other beings using language. Yet, for certain philosophers, chief among them Wittgenstein, this implicit universalism might be a false idea generated by an excessive belief about the effectuality of language. Here we are becoming Kantian again. However, let’s proceed a bit further with our meditation.

Why do things proliferate in nature and in societies? Perhaps, some would say, out of fear of nothingness, to avoid absolute eradication. A survival instinct, the avoidance of death would generate proliferation and multiplicity as a reaction to elimination. This is part of the philosophy of Darwinism. How would it work cosmologically? Perhaps the following narrative: in the beginning there is nothing. At one point, nothing realizes its being. The mega-emotion generated by nothingness realizing that it iswould be manifested as a massive explosion of proliferation (we can again call it Big Bang or we can call it Creal). In such a fable, if nothingness became afraid of its own void, all we see around us in the cosmos, nature or societies, all the disparity and proliferation of multiples would be motivated by a primordial emotion: fear of elimination, fear of being void, the absurdity of death as primordial panic.

Here is an alternative story: in the beginning there was nothing (this refrain does not change). Nothing realizes that it is: this realization generates an infinite joy, an absolute awakening of exhilaration that emerges not from a primordial being or beings but from nothingness itself. In realizing that it is rather than not, nothing explodes of joy, the joy of being. The proliferation that we called Big Bang or Creal becomes a proliferation of joy.

Traditional modes of system representation as dynamical systems, involving fixed sets of states together with imposed dynamical laws, pertain only to a meagre subclass of natural systems. This reductionistic paradigm leaves no room for final causes; constrained thus are the simple systems. Members of their complementary collection, natural systems having mathematical models that are not dynamical systems, are the complex systems. Complex systems, containing hierarchical cycles in their entailment networks, can only be approximated and simulated, locally and temporarily, by simple ones. Anticipatory systems are, in this specific sense, complex, hence this introductory chapter on Complex Systems in the Handbook of Anticipation. 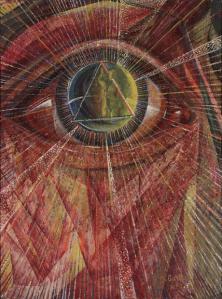 In his interrogation of disciplinary society in Discipline & Punish, Michel Foucault comments on the common Western belief that, “Every detail is important since, in the sight of God, no immensity is greater than a detail” (Foucault, 1977, 140). This notion of the eye of God, the eye that can see all, as particularly concerned with minutiae is central to the development of Western culture and social practice. As Foucault reveals throughout his explication, this will to omniscience is attempted through the discipline of the masses by both physical and psychological division and categorization. However, these means by which Western disciplinary society seeks to possess the eye of God inherently prevents it from seeing all. Rather, Emerson’s concept of the transparent eye provides a more useful blueprint for how man may not only obtain the eye of God, but how he may ultimately become it.

While this essay sadly…

Listen to the show here

Luis de Miranda is a philosopher and author of Being and Neonness, a new cultural history of neon that will be published by MIT Press next month. He’s an international philosopher whose thinking centers around the creation of reality under a model he calls crealism.

Tom Zickuhr is a commercial neon signmaker in Madison. The neon signs crafted in his east side shop light up businesses all across the city. His work is also shown at the Milwaukee Art Museum and the Museum of Modern Art in New York. He’s a lecturer at UW-Madison, where he teaches students how to bend neon. Every spring his students have an exhibition at the Chazen Museum of Art, and this year’s exhibition is coming up in early May.

Meryl Pataky is an Oakland-based sculptor and fine artist, and curator of She Bends—a national of exhibition of work by women neon benders. The Milwaukee iteration of She Bends is on view at Milwaukee’s Var West gallery until Saturday, March 23rd.”

In this essay, we sketch out a method, histosophy, which makes possible the study of intellectual history and conceptual genealogy both in depth and over long periods of time. Histosophy uses digital tools to survey ‘large issues within small compasses.’ A genealogy of signifiers, it considers metonymic parts of a problem in order to contribute precisely and coherently to a larger perspective. We outline the theoretical contours of our approach. We exemplify how it works in practice by looking at the signifier ‘esprit de corps’, the study of which is presented in detail in the histosophical book The Genealogy of Esprit de Corps (Edinburgh University Press, 2019). The phrase ‘esprit de corps’ has been widely used since the eighteenth century in different discourses (political, military, sociological, etc.), but it is sufficiently limited that its genealogy can be traced across centuries and nations with precision, coherence, clarity, and with the help of automated search engines. By contrast, related but bigger concepts like freedom, individualism or solidarity are part of dozens of disparate and fuzzy discourses, so often uttered that the analysis of modern uses is problematic. The histosophical methodology is applicable in six discrete stages, here outlined.

Lacan and The Truth of Capitalism

Analyses of social phenomena such as capitalism are often connected to Marx directly, but in order to question the “truth of capitalism”, we will benefit from reading Lacan’s elaboration on the discourse of the capitalist, and his echoing of Marx and Heidegger in the concepts of plus-de-jouir, jouissance, object a and the Thing.

In Peut-on jouir du capitalisme? Lacan avec Heidegger et Marx (Max Milo, 2008), an essay that Anna Redei will have translated into Swedish for the occasion of this conference, Luis de Miranda, who also practices a form of psychoanalytical philosophy as therapy for individuals in Stockholm, proposed a close reading of Lacan’s Seminar XVII (1969-1970), entitled The Other Side of Psychoanalysis (L’Envers de la psychanalyse), in order to unveil what is at stake behind the capitalist appearance of fun and what role a desire for an absolute plays in our current dominant economical system. In this talk, we will take advantage of the translation process, and the comparison between French and Swedish society familiar to both speakers, to reconsider the actuality of Lacan’s analyses in the context of the now digital state of capitalism, dominated by the paradigm of “predictive analytics” and the desire to anticipate the future considered as a more and more accessible object of desire. Effects of truth about the future abound in optimistic or catastrophic propaganda. Is the future the new object a of digital capitalism? How can we articulate an approach to the truth of capitalism when capitalism seems to constantly mutate? Or is the desire for mutation part of its truth?

In which signifiers does the truth of capitalism reveal itself? We will examine the discourse of capitalism in particular through analysing its semiotic manifestation in advertisement, with a few symptomatic examples.