We tend to see the future as caused by the past. But biology for example shows us that causes can be in the future. The growth of a child is in part the fulfilment of models. This is true organically and culturally.

In my forthcoming book, Being and Neonness, a revised version of L’être et le néon (2012), I initiated a reflection on creative anticipation via an analysis of the philosophical character of Merlin the diviner. I have slowly come to see crealectics as an exploration of anticipatory systems from the point of view of the realization of the Creal. This year, I will try to produce the lineaments of an intellectual history of anticipation during my research postdoc at Örebro University. Anticipation is a richer concept than prediction, because it indicates more transparently that there is an element of creativity in the prediction of the future, as opposed to only statistical or probabilist prediction. The future is not an object.

“An anticipatory system is a system containing a predictive model of itself and/or its environment, which allows it to change state at an instant in accord with the model’s predictions pertaining to a later instant” (Rosen, Anticipatory Systems, 1985, p. 341).

The models are not only predictive, but composed of desiderata, affirmations and negations.

Roberto Poli is right, in my view, to claim that:

“Life in all its varieties is anticipatory, the brain works in an anticipatory way, the mind is obviously anticipatory, society and its structures are anticipatory, even non-living or non-biological systems can be anticipatory.” (Poli, “The Many Aspects of Anticipation”, Foresight, 2009).

In my book L’art d’être libres au temps des automates (2010), I mentioned Alain Berthoz and his now influential research on the anticipatory brain – what he called simplexity: when the brain must take a decision and act, it has to simplify creatively according to certain models of its complex environment. The brain’s preaction is to project creatively into the real. Today, the view that the brain is predictive has gained momentum among mainstream analytic philosophers of mind (Clark et al.), although it will take a bit more time before these philosophers — who tend to rediscover much later what continental philosophers already foresaw earlier — realise that prediction is creative. For example Durkheim already knew in the nineteenth century that the mind is extended and embodied, and even collective.

In the next months, I will be referring to current research on artificial intelligence (in dialogue with computer scientists here in Sweden (for example Carlos Azevedo, from Ericsson Research or Alessandro Saffiotti and Lars Karlsson from Örebro University) to nourish my reflection on anthrobotic anticipatory systems. If it is true for example that the next step in AI is about world-models, as claimed by Yann LeCun, then the engineering of anticipatory features is worth observing from the point of view of the philosophy of technology and the history of ideas. What makes us (or what will make us) different from machines might turn around the idea of anticipation and world-realisation.

Poli offers a short bibliography on anticipation that I reproduce below, and that I intend to explore this year to contribute to anticipation studies from the point of view of the crealectician.

As I noted in Being and Neonness, our perception of the future cannot be only mechanistic, statistic, or probabilist. There is an element of creative intuition of what is to be realised that is part of our action on the real. Of course we live in anthrobotic systems, whether we like it or not (see my collective paper “We Anthrobot”, 2016): we need to integrate technology in our systematic approach, but we need also integrate the spiritual — what Gregory Bateson called “the mind” or what Spinoza called the third-kind knowledge of the body, which can be defined as an art of realization, a reading-shaping of the futures by intuiting the signs – the crealia – of the present. 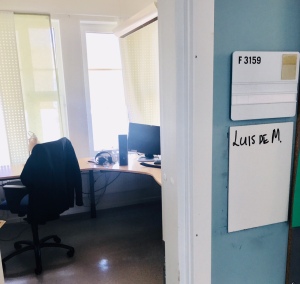 Leydesdorff, L. (2008). The Communication of Meaning in Anticipatory Systems: A Simulation Study of the Dynamics of Intentionality in Social Interactions. In D. M. Dubois, Proceedings of the 8th International Conference on Computing Anticipatory Systems. Melville NY: American Institute of Physics.

Nadin, M. (2004). Anticipation. The End is Where We Start From. Baden (Switzerland): Lars Mueller Publishers.

No matter what neo-conservatives would have you believe about universal archetypes and the perenity of human worlds, social reality is not a true universal, but a slowly built construct of convention.

What is a city – a polis? It’s a world, a co-created environment, a network of realizations “knotted” together to define a territory that is more or less shared, shaped by discourses, symbolic crystallizations, viscous ideological grammars serving the interests of temporary dominant groups and forming a bulwark both against external turbulence and internal ambitions. The hyperrealist prejudice has it that on earth there is only one, just about coherent world, i.e. the “capitalist-humanist” system, which strikes a delicate balance between maximizing financial surplus-value and controlling empathy. In the capitalist-humanist system we endure, our suffering is explained in terms of capital and humanism: the two fake-absolutes of money and human nature operate as a reassuring or controlling duo and are the means to a reification of life and corseting of subjectivities.

Many humans prefer to suffer in a familiar and consensual frame of reference rather than adventure into their fear of the meanders of creal perception. In sociology, the Thomas theorem attributed to William Isaac Thomas in 1928 has it that “If humans define situations as real, they are real in their consequences”.[1] Of course, social articulations are more complex that this, but it is fair to say that a city-polis, a social structure are the product of daily reconducted or modified agreements, drawn from among an infinite number of possible interpretations and configurations, extracted from the panphony of the Creal, the chaosmos as infinite network of virtuality. As the earth becomes globalized under the law of capitalist humanism, alternate possible words tend to be more difficult to establish sustainably; such is the paradox of laissez-faire that it produces mimetism.

If a majority agree in believing that the current global ideology is acceptable, then most actions will converge to validate and realize this belief: particular rites of passage will be repeated, for instance, perpetuating money as the means of universal symbolic exchange. Karl Marx wrote in his 1844 manuscripts: “By possessing the property of buying everything, by possessing the property of appropriating all objects, money is thus the object of eminent possession. The universality of its property is the omnipotence of its being. It is therefore regarded as an omnipotent being. Money is the procurer between man’s need and the object, between his life and his means of life. But that which mediates my life for me, also mediates the existence of other people for me. For me money is the other person.”[2]

Everyone knows from experience that our habits shape reality. It’s what we call the “force of circumstance” in common parlance. At the level of society, a “new” convention always appears within a system of conventions that precedes it. If the new convention is too far removed from its basis of application, it won’t be adopted easily. This is why social creation, societal renewal is a slow, viscous process, and radical individual creation even more difficult. For Thomas’s theorem to conform more closely to experience, we could reformulate it as follows: “If humans define a situation as real, and that this definition is not too far removed from the definition previously agreed on by most people, then the definition can in the mid-term become real in its consequences.” Let’s take the representation of a wave function of a violin string on a horizontal and vertical axis: generally speaking modulations are curved. As the physicist Leonard Susskind explained, a vertical rise of the wave function would mean that the string breaks. To change reality, you cannot attack it vertically, because it will break you faster than you manage to break it.

The world becomes sometimes what an efficient web of belief admires, provided the group actively relays the fervor underlying this admiration. More often than not the world becomes what most people reproduce out of frustration, confusion, and lack of cognitive integrity.

Neo-conservatives, Jordan Peterson and like-minded followers, condemn postmodernism and social constructivism, but they are themselves postmodernists: they are willing to shape the world in their image. Their strategy, one among others, it to refer to universal archetypes and eternal moral values. Don’t be fooled: they also are social-reality creators and want to impose a new domination. They are sad postmodernists, because they use the rhetoric of moralism and display a form of Sartrean bad faith by claiming that the past is the model of truth.